To promote and encourage the growing of all members of the Geraniaceae family of plants, in particular, Pelargoniums and Geraniums. 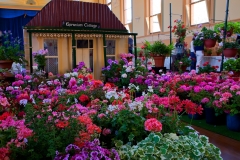 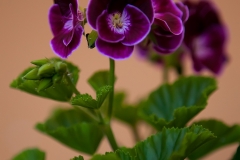 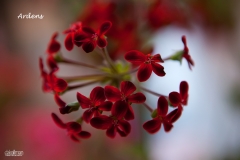 A FEW NOTE FOR BEGINNERS

I will try to give some information to our new members or people unfamiliar with the background of this varied family of plants, about what are Geraniums and what are Pelargoniums.

This may seem an odd statement, but “all of the plants that you have, in the past, thought of as Geraniums are probably Pelargoniums”.

The plants that are often called Geraniums have the correct botanical name of Pelargonium X hortorum.  The X in the middle means that it is a hybrid plant.  That is a cross between two or more species.  The species are the plants as they exist in the natural state in the wild.  Growers call P.X hortorum.  Zonal Pelargoniums, or just Zonals.

Another group of hybrid plants that we grow is, the ivy leafs Pelargoniums, and here again these are Pelargoniums and not geraniums.  They are called ivy leafed because the leaf has the same shape as the leaf of the ivy plant.  The main parent plant of the cultivated ivy leafed types is p.peltatum.  The word peltate means shield like, referring to the shield shape of the leaf.

There are also many types that may be called scented leafed Pelargoniums.  Many of these are species, meaning the plant as it grows in the wild, but many are cultivated varieties (cultivars) that have been produced by crossing different species.

You will hear us talk of Deacons and Staphs.  Deacons are a race of plants that were bred, in Eastern England by Rev. Stanley Stringer.  They are basically a cross between a miniature Zonal and an ivy leaf type.  Rev. Stringer was a Deacon when he bred them and they were given the name Deacon because of this.  They are what you might call the Pelargonium equivalent of the Floribunda Rose; they flower very prolifically over a long time.

All of the plants in the Deacon series have the word Deacon in the name.

Ted Both bred the Staphs in South Australia during the 1950’s and early 1960’s.  They have a star-like, or five-fingered leaf shape and a flower of a similar nature.

The plants that we deal with all come from a family of plants called Geraniaceae.  This family all has the characteristic of a seed head in the shape of a bird’s beak.

The other members of this family are Geraniums and Erodiums.

True Geraniums are, in the main plants that you might wish to grow in a rockery or border.  They are generally smallish plants with divided foliage and small round flowers about the size of a ten-cent coin. The colour of these flowers is usually from pink to blue; though in some cases the pink is as dark as purple or red.  Some species have sported to produce a white flower also.